Skills Shortage in IT: How No-Code Can Help

Find a solution to the huge skills shortage in IT with no-code solutions. Discover how Open as App no-code platform can help you tackle this issue. 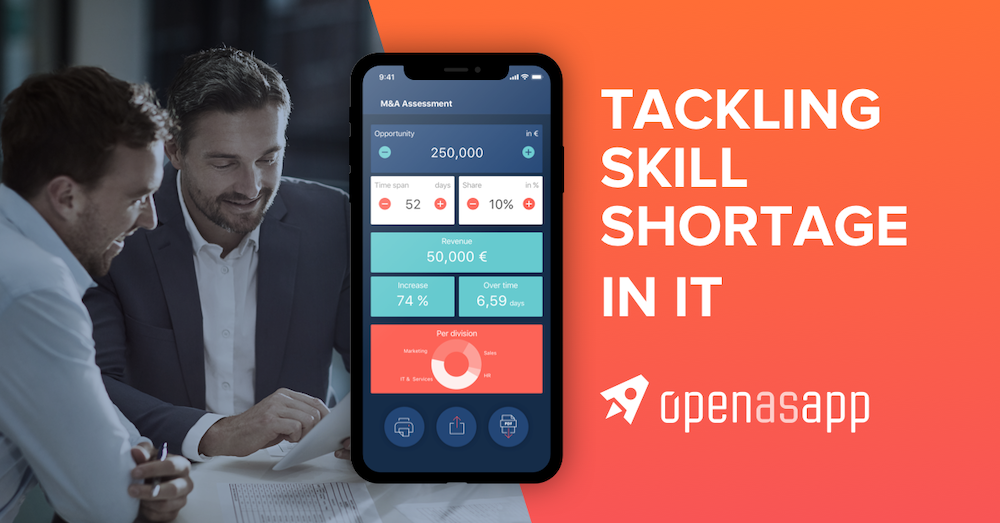 There is a huge skills shortage in IT. According to Gartner, the demand for business apps is 5x higher than current IT capacities. One of the reasons for this is the overwhelming demand to create software solutions for every possible kind of problem. Take that, along with the fact that there are simply not enough developers and IT professionals in general, and you end up with a market that consistently cannot deliver.

But there is a simpler way out than the industry may expect. Citizen development no-code platforms are increasingly opening up a whole range of possibilities for companies to tackle skills shortage in IT.

By investing in citizen development platforms, companies address the skills shortage in IT, enable and empower their employees to find working solutions to everyday problems, and protect themselves from issues like shadow IT and the security concerns that come with them. It is estimated that by 2024 such application development environments will be responsible for more than 65% of application development activity.

So let’s have a closer look at the reasons for the skills shortage in IT, and how companies can efficiently address it with the help of no-code apps!

The dimensions of the IT skills gap

The lack of skilled IT specialists is a global problem. According to the IDC, in 2020 the lack of IT skills will incur losses worldwide totalling $390 billion annually. This lack is reflected in the vast number of unfilled vacancies across the globe.

For example, only last year Germany’s digital association Bitkom found that the country had a total of 124,000 vacancies for IT experts. The number of vacancies had become two and a half times more than it was in 2017 when 55,000 positions needed to be filled. Similarly, according to Digital Skills for the UK Economy, in 2019 the UK was lacking about 40,000 IT specialists which leads to losses of £60 billion every year.

To underscore the point further, one IDC study found that over 52% of IT leaders say that the skills gap is a major challenge in their organization. Meanwhile, DevOps and Appian, in their Digital Transformation Readiness Survey, found that 82% of organizations can’t attract and retain the quality and quantity of software engineers they need to feed the business with innovative technology.

Why is there a lack of IT specialists?

The most common reasons that are typically cited for the lack of talent in IT include: ​

Of course, there are many other reasons that could be cited for the lack of people in IT. The overarching theme here, though, is that of how IT and digital transformation have become a major competitive advantage.

With the digitalization of the modern workplace, companies have seen themselves forced to become digital in order to remain relevant and competitive. This creates a hyper-demand for software solutions and all the inputs that go into producing them – i.e. skilled specialists. In turn, this creates various pressures for businesses that see themselves pushed to respond to such demand, yet are unable to do so, and solidifies the overall crisis in the industry.

What are the consequences for companies?

Apart from the financial losses, the lack of IT specialists also produces a variety of other negative consequences for companies of all sizes. Appian and Forrester have covered such consequences in two different papers. Here are some of their findings.

According to Appian’s survey cited above:

Forrester’s Large Enterprises Succeeding With Low-Code examined both the consequences of the lack of specialists, as well as the possibilities offered by low-code solutions. Some of the results of their report include the following conclusions:

Across the board, enterprises in this report were found to be under pressure to do more with what they have. Developers, in particular, were found to struggle to deliver what the business needs in time and in a secure way.

Of course, all of this also raises the question of which companies are impacted by the lack of IT specialists. The simple answer to that question is – everyone. With mostly big companies being surveyed in these reports, the stats from mid-sized and smaller companies are certainly not brighter. Furthermore, companies that are geographically outside of technology hubs are also severely impacted because they are less likely to be able to attract talent the same way in which big companies can.

So, with no end in sight for the skills shortage in IT, one is also prompted to ask what can be done about it, and what tools we have at our disposal to work around this challenge?

Here’s how no-code citizen development is better suited than many other solutions to respond to the call.

How can the skills shortage be overcome?

Companies have been asking themselves for a while now what they can possibly do to avert the looming skills crisis. Of course, there are many answers to that problem. Some suggestions have included:

All of these are great, though some would require a much more concerted effort that must include broad coordination and cooperation between the public and private sectors. This is not to say those solutions should not be implemented but that it will likely take some time.

One way in which the crisis can be addressed immediately within companies is through the implementation of systems that allow greater numbers of employees to produce software solutions, without having to acquire specialized IT skills. These are solutions that are within the low-code and no-code market niche.

Some differentiations are necessary at this point. Low-code and no-code platforms generally refer to solutions that permit users to create software with little or no specialized IT knowledge and skills.

While studies have mostly been done on the impact that low-code application development solutions are having on companies, these results are just as easily applied to no-code solutions. In fact, it should be expected that no-code solutions would outperform low-code ones due to their greater accessibility.

According to a study conducted by Gartner, by 2024:

Moreover, both Gartner and Forrester found that arming non-IT users with no-code tools accelerates development, and helps drive increased business value. This allows enterprises to meet their requirements for both quality and speed of development, as well as to build complex business logic. This helps companies increase their resources vastly and add a business impact to IT where previously there was none!

In other words, no-code citizen development solutions hold a big promise for tackling the IT talent shortage, at least in part. Here’s how Open as App fits into the picture.

What impact can no-code have?

App development, sharing, and support typically require highly professional, extensive IT resources, and budget. As a consequence, because resources and budgets are limited, business data is instead frequently presented in static, non-interactive, and non-user-friendly ways.

Or, alternatively, instead of offering an app to customers, database contents and Excel solutions are often distributed by companies in an unprotected fashion as open spreadsheets or PDFs. For companies, this causes a loss in productivity, speed, and data (know-how). It also sets back innovation and creates a negative customer experience.

Yet, it is estimated that there are 750 times more spreadsheet users than app developers. While non-IT users are of course no substitute to developers, if they are equipped with the right tools, they could be of great help to the former.

With the help of no-code citizen development platforms, regular business users could be generating apps without needing to learn programming skills. No-code can enable a symbiosis between citizen developers and software developers to arise. Within this symbiosis, those apps that can be created using a no-code environment could be delegated to citizen developers, whereas the rest would be left to the IT department. This is one way in which no-code can address the IT skills shortage. This is how Open as App works.

Open as App (OAA) is the first no-code platform that turns business data into apps automatically while retaining the data, logic, and calculations of the source. All existing business solutions with structured data can be turned into apps or bots and shared in a secure and managed way – by citizen developers without coding. This helps companies to save time and gain resources because IT is no longer a bottleneck to innovation in daily business.

With Open as App companies of all sizes add a powerful platform to their existing IT landscape – creating apps and bots that are linked to an existing data source, only with a few mouse clicks. Compared to individual app development, this means user-friendly and protected data sharing at a very low cost.

With its platform Open as App empowers companies of all sizes and individuals to:

This means that a no-code citizen development solution like Open as App not only frees up development resources that are vital for the company but also IT resources in general, as users are empowered to create their own solutions. This, in turn, feeds back into the resources and the speed with which a company can achieve greater digital transformation.

How can companies integrate no-code into their business?

Given the size and seriousness of the skills gap in IT, companies are prompted to act in order to stay on track. No-code offers a solution that, once implemented, will create resources where there previously seemed to be none.

Moreover, integrating a no-code solution does not require you to perform any major overhauls of already existing processes and structures. Instead, no-code can function alongside many of these and be linked to them.

Are you curious to test no-code apps for your company?

Give Open as App a try!  You can start with the Free plan to see how it works, and then move to Basic at €39 per month when you need more features and functionalities. Looking for even more functionalities or an enterprise plan? We’ve got you covered!